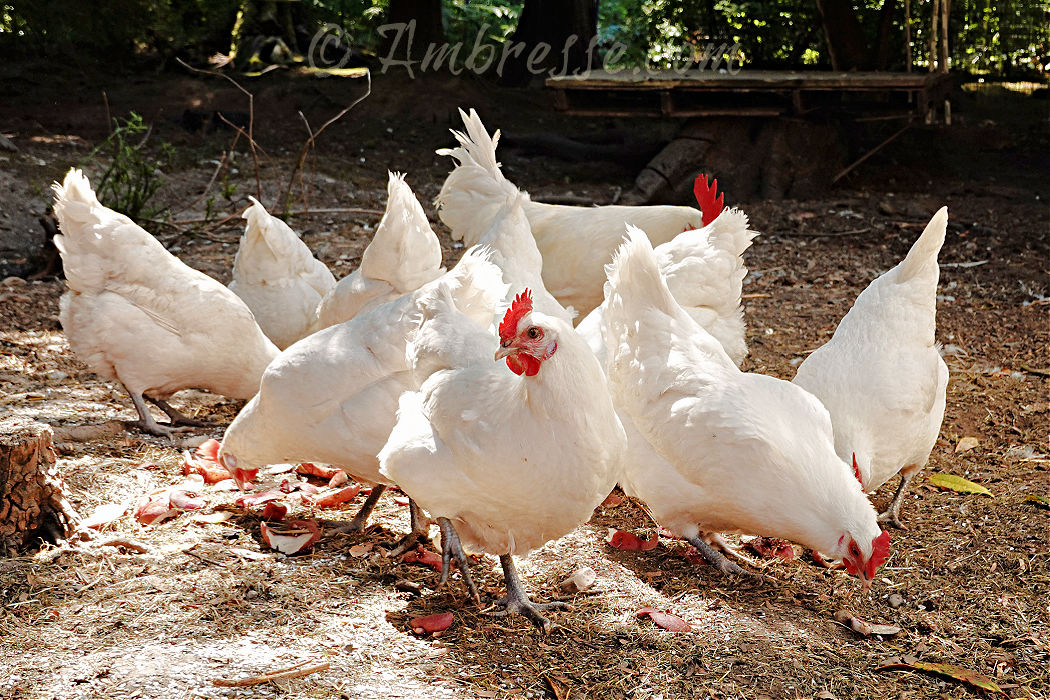 Bresse Chickens have been described as the best-tasting chicken in the world, especially in France. Terms like "the queen of poultry" and "poultry of kings" penned in the mid-19th century are a reflection of the unique richness of this breed.

Nor are they slouches regarding egg-laying. With reason they are called a dual-purpose breed. (I call them "triple-purpose," because of their taste and richness.)

Overview of the American Bresse Chicken

American Bresse are a medium sized dual purpose breed. They grow very rapidly until they reach their adult weight of up to 8.5 pounds.

Additionally, the drive to forage appears to be built into their genetic code. The long-standing French practice of feeding low protein feeds has resulted in birds that forage heavily for bugs, worms, and other nutrition. Give them a pasture, and the feed bill will drop.

Miss Priss is taking a stroll through a late-summer field at Ambresse Acres.

American Bresse Chickens Excel in Both
Meat and Egg Production

American Bresse as a Meat Breed

Cost of Bresse Chicken in Paris Butcher Shops in 2021:

Meat production is where the American Bresse shine, as compared to other chicken breeds. Multiple sources describe them as "the most delicious chicken in the world"9; how do you beat that?

Fat-marbling. Preparing the bird for market in the time-tested methods utilized by French farmers before butchering (known as finishing) results in the famous, Angus-steer-like, fat-marbling throughout the meat for which the Bresse chicken is known. This is a big reason why gourmet chefs have a love affair with Bresse chickens. The fat that melts while cooking contributes to the melt-in-your mouth explosion of chicken flavor even when prepared with minimal herbs or spices. (Is fat bad for you?)

Flavor. In the words of BresseFarms.com, American Bresse chickens have "intense flavor, leaving you begging for more." That rich flavor may be due to feeds, air-drying, fat-marbling, or possibly genetics. The French believe that the unique Bresse flavor results not only from genetics, but also from the terroir*- the collective physical qualities of the Bresse Valley location, including the feeds and forages that grow there.

"Terroir* is a French term used to describe the environmental factors that affect a crop's phenotype, including unique environment contexts, farming practices and a crop's specific growth habitat. Collectively, these contextual characteristics are said to have a character; terroir also refers to this character.

"Terroir is the basis of the French...appellation d'origine contrôlée (AOC) system..." (Wiki).

Bresse chickens are the only living creatures protected by the French AOC system, which presumes that the land on which the chickens are reared and their feeds and forages are grown imparts the unique qualities and flavors that are specific to Bresse Chickens. And as with protected wines, there will no doubt be some debate as to the extent of influence that terroir actually holds over the Bresse breed.

American breeders have certainly been raising some intensely flavored and fat-marbled American Bresse chickens; perhaps the North American terroir is not too shabby?

For sheer speed of "days-to-market," I don't think any meat breed can compete with Cornish Crosses.

4-Way Terminal Cross
A two-way-crossed hen (AB) is bred with a two-way-crossed rooster (CD), producing 4-way crossed (ABCD) offspring. These offspring are your familiar "Cornish cross" meat birds that are all destined for marketing by the time they are 8 weeks old.

Cornish Crosses are the result of a 4-way terminal cross using cockerels and hens that have been specifically bred for the purpose for many generations, and are the main commercial meat breed around the globe. They gain at least a pound a week, and are market-ready in 6 to 8 weeks flat; if you miss the target date by much, you may lose birds to sudden death. Processed, they weigh 4.5 - 7 pounds. (Quick note: Cornish crossed with White Plymouth Rocks are called Cornish Rock Crosses.)

Freedom Rangers are another very popular meat chicken. These birds are also hybrids derived from heritage French stock from Burgundy and Brittany, and then crossed with American meat breeds such as New Hampshire. They perform a distant second to Cornish Cross itself. Freedom Ranger birds are ready for market at 9-11 weeks at weights of 5-7 pounds live weight. When processed, they weigh 3.5 - 5.5 pounds.

American Bresse can't compete with Cornish Cross in speed to market of course, but I doubt you'd want them to, as they'd lose the magic of flavor and succulence. They require a minimum of about 12 to 14 weeks to market, depending on whether you take the time to "finish" them or not. That is only slightly slower than the Freedom Rangers, and nearly on par with the hybrid known as Red Ranger.

American Bresse chickens are also very good egg-layers, although leghorns no doubt have them beat on the numbers. What is very cool is that it is not unusual that an Am Bresse pullet would start laying her first eggs at 16-17 weeks of age. The typical egg count per season per hen is around 250, although I'm sure some hens may lay up to 280 or so. 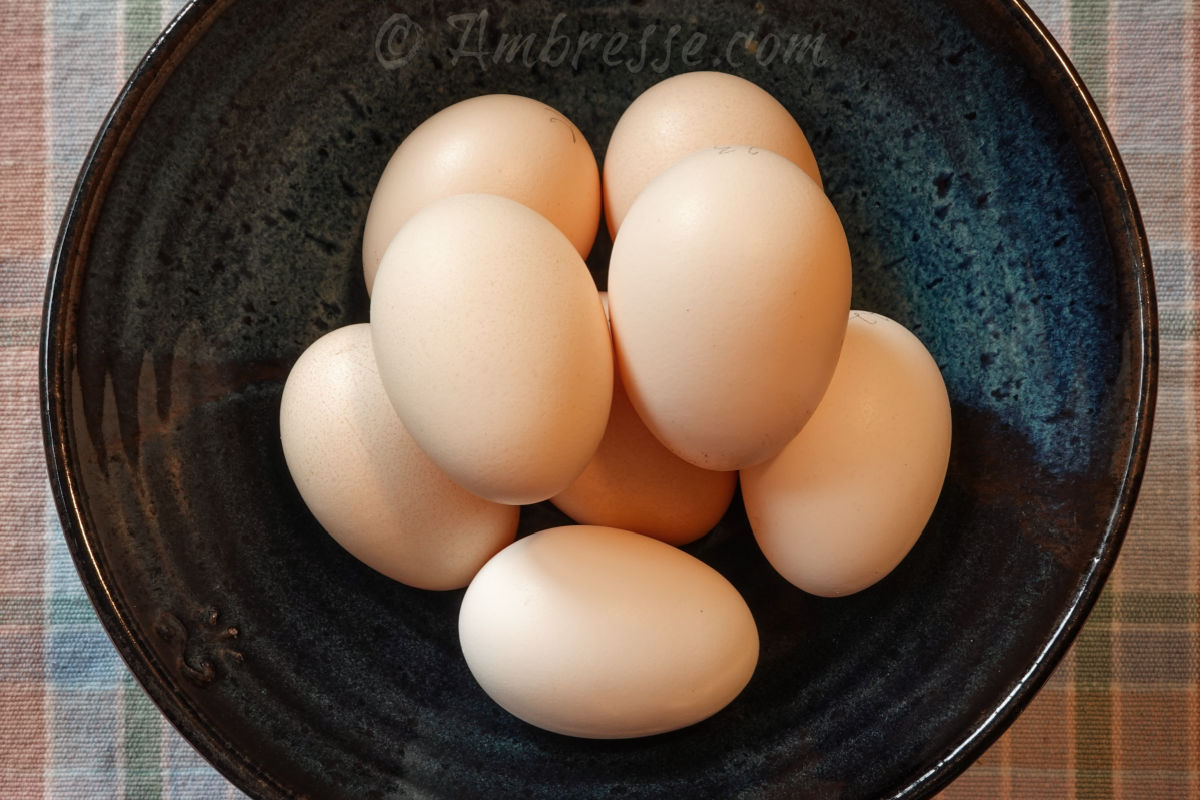 American Bresse Eggs are "tinted," some nearly white, some a light tan. These eggs were laid by white Am Bresse hens.

Interestingly, white and gray American Bresse lay 2 ounce (57 gm) eggs which is a typical size, while the black and blue varieties of Am Bresse tend to lay larger eggs - around 2.5 ounces (71 gm).

Am Bresse vs. Leghorn Egg Layers

Leghorns, both brown and white, are prolific egg layers, and are kept exclusively for their egg-laying capabilities. This is the breed that the big egg ranches use, and when the birds outlive their usefulness, they are trucked by the thousands over to Campbell's Chicken Soup, or another end of the road destination. 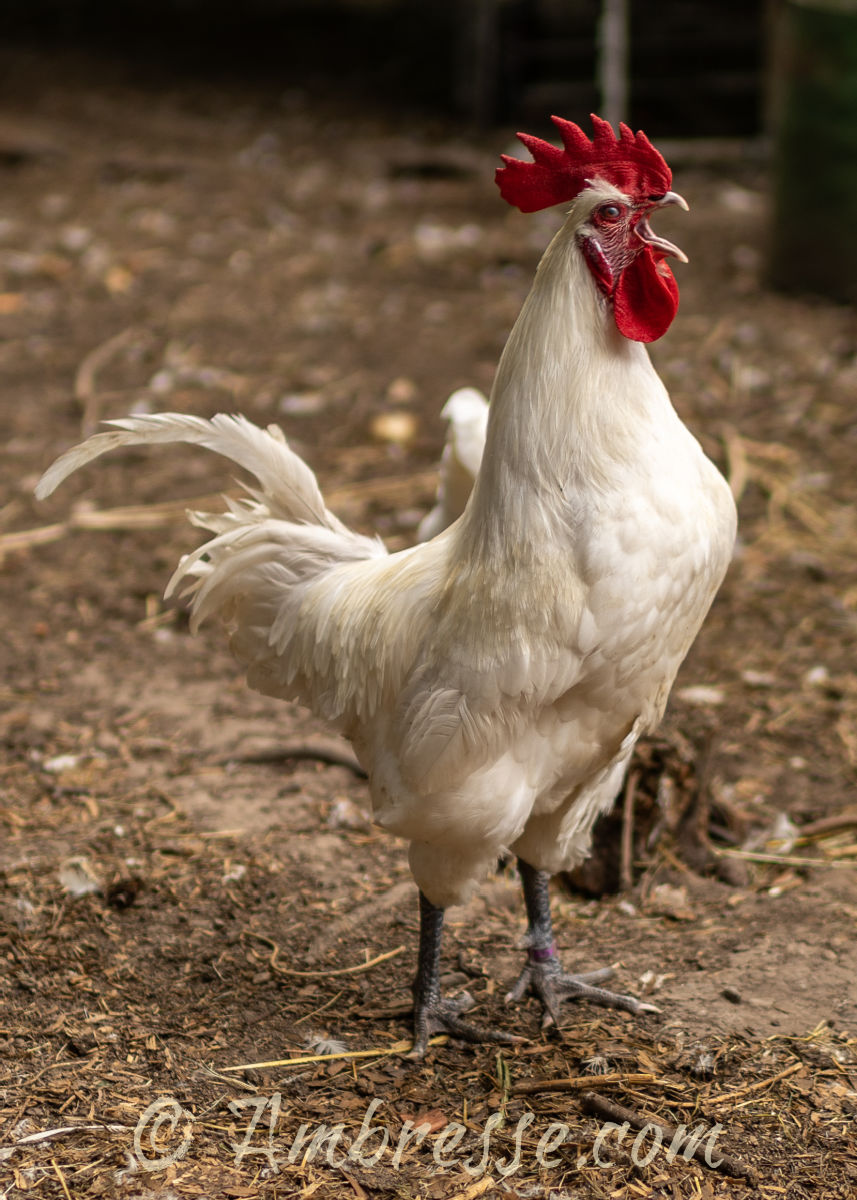 Crowing white American Bresse rooster at Ambresse Acres. His eye is obscured by the nictitating membrane. 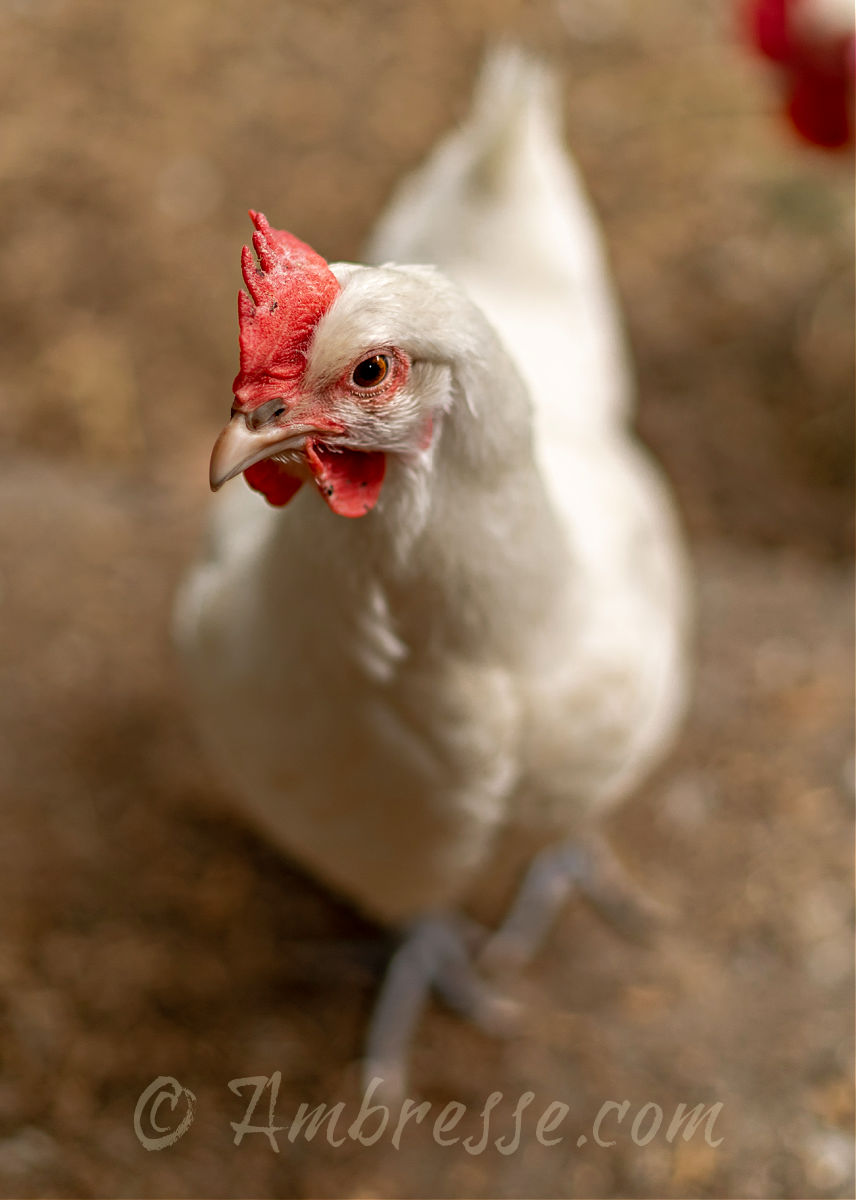 The white American Bresse is the variety that has achieved commercial recognition in France, and is therefore more popular, imported in greater numbers, and is most common in North America.

Here is a brief description; see the standard of perfection for more detail:

Gray is actually not gray, but silver-pencilled in black on the wings, hindquarters, and tail, with the head and the front of the bird being white. The white Am Bresse description above also describes Gray American Bresse, with the exception of feather color.

Black American Bresse vary little from White American Bresse, other than color and size. They are feathered in solid black, and they are a bit smaller.

Here is a brief description; see the standard of perfection for more detail:

Blue American Bresse vary from the Black Bresse mostly in color only. Blue Am Bresse are blue from top to bottom. The head and neck feathers are a bit darker blue than body feathers, which have a somewhat laced appearance.

Legs are a truer blue/gray as opposed the the darker gray of black American Bresse chickens. In all other ways they are similar to the black variety.

American Bresse chicks of all varieties are remarkably fast-growing. They forage early and well since they have been genetically encouraged to forage heavily.

They are born with yellowish legs, which slowly take on the steel blue hue over a period of a couple weeks or so. 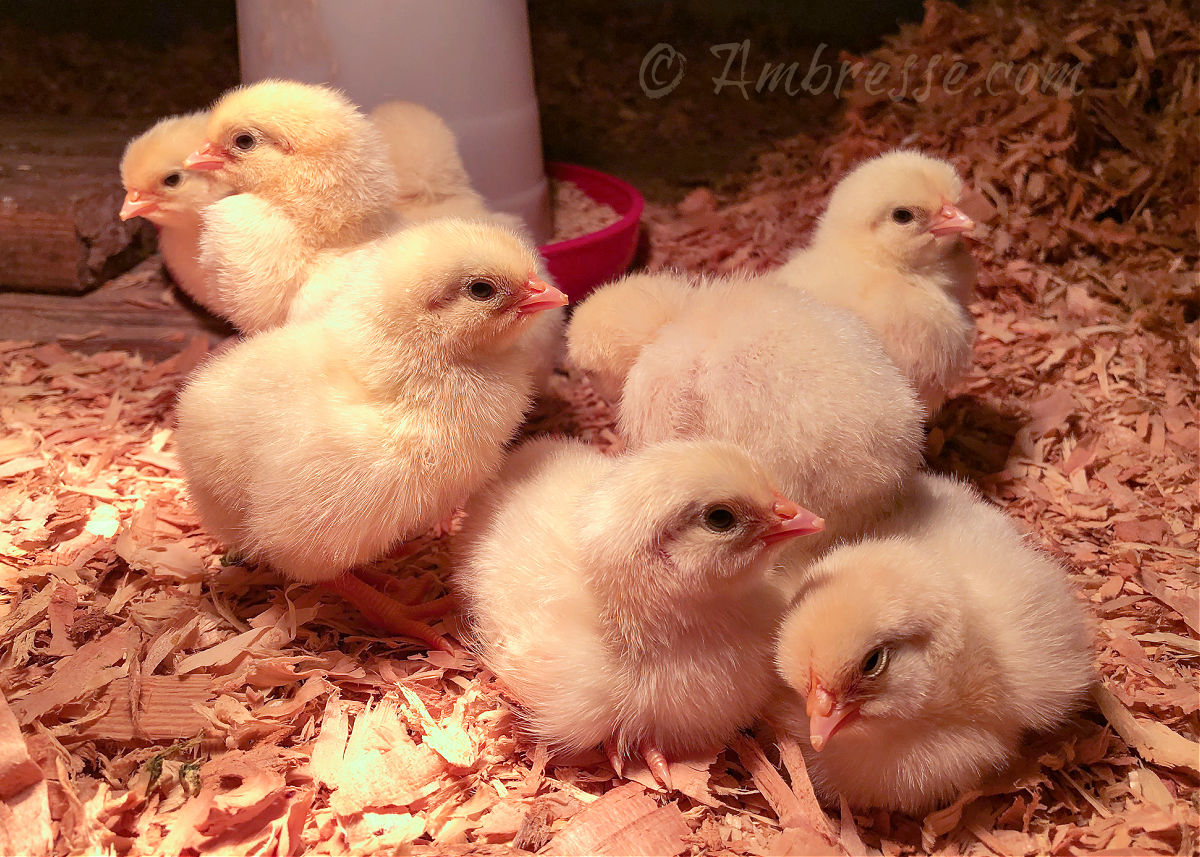 Is American Bresse the Best Chicken in the World?

Well, this is a call that one must make for oneself, since the "best chicken in the world" is, for you, the breed that meets YOUR needs the best. Some breeds are excellent egg-layers, and some are great meat birds. The American Bresse chicken was clearly bred to provide the best traits of both egg-layers and meat birds.

Because of these characteristics, it may be difficult for any who need or appreciate a very good all-around chicken breed to find a more balanced or desirable breed.

Homesteaders and any who can develop a niche market for a gourmet chicken product will want to know more about American Bresse Chickens.

What do you think? Let us know!

Are You Considering Whether or Not to Raise American Bresse? 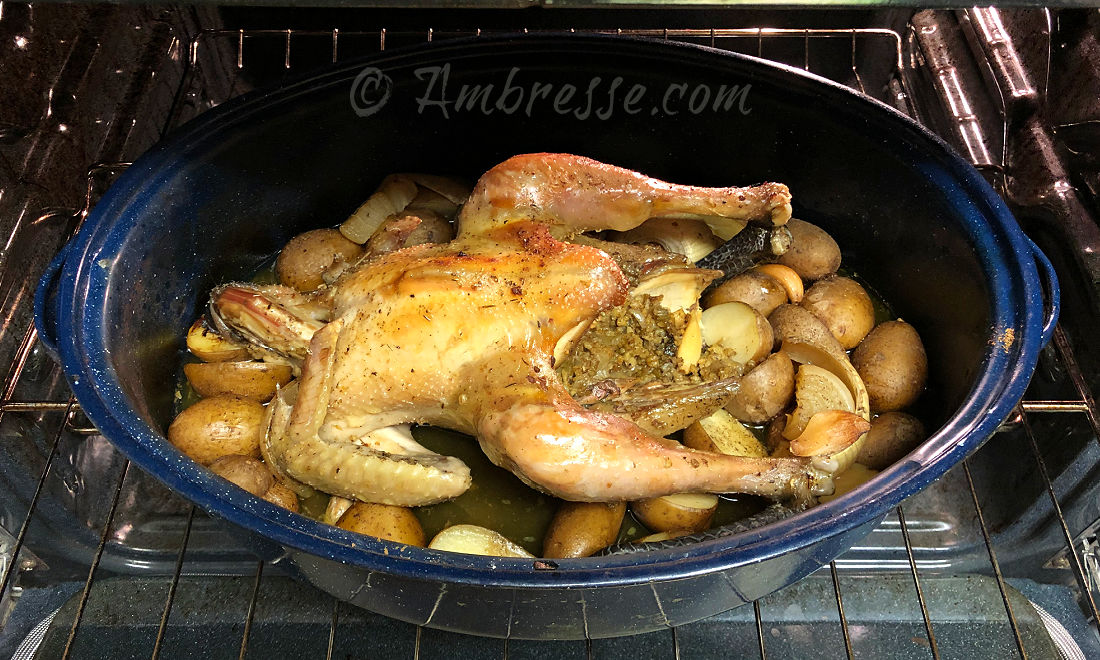 I'd like to remind you that of their many advantages, TASTE is one of the breed's major claims to fame. I encourage you to experience the taste for yourself!

As I write this page, there is an American Bresse chicken in a roasting pan in the oven. The smell is distracting me. I had prepared it like a small turkey, stuffing the cavity with a very simple traditional stuffing recipe, and baked it with potato halves.

Not five minutes ago, I did what all cooks do - opened the oven and sampled some of the dripping-soaked stuffing. Oh, my goodness. I can't even tell you how delicious it was. I was not prepared for that!! The Bresse Farms flavor description was spot on.

State of the American Bresse Breed 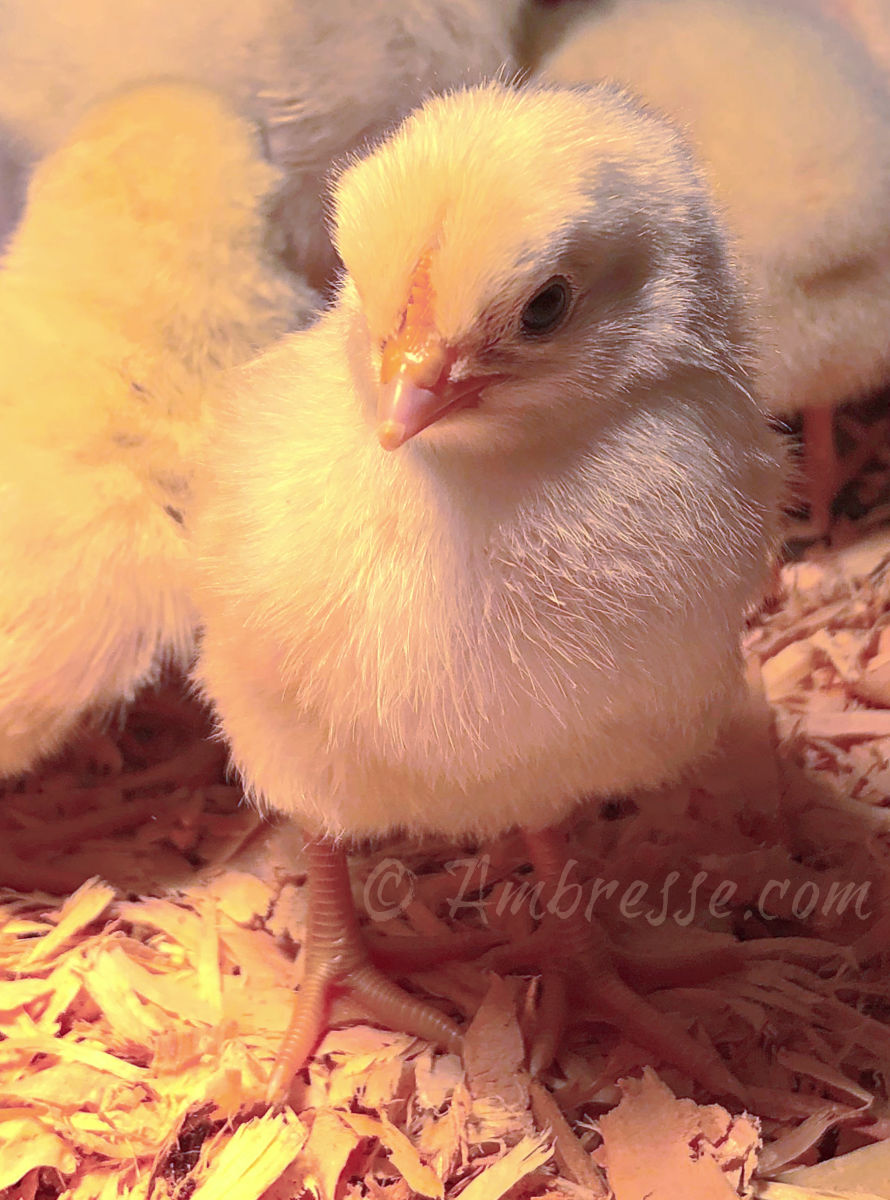 Hi! My name is Charlemagne, and yours?

For a number of years, Greenfire Farms, the ranch that initially imported Bresse into the United States, and Bresse Farms, were virtually the only two hatcheries that supplied chicks and eggs to breeders in the United States or Canada.

Eleven years have passed as of 2022, and more breeders are taking up the challenge of raising American Bresse. Without detracting at all from the original farms, it's good and healthy for the breed that additional breeders can now raise and work together to improve the American Bresse breed.

We at Ambresse.com wish you the very best of success and hope you'll join the mission of improving this wonderful heritage chicken breed! 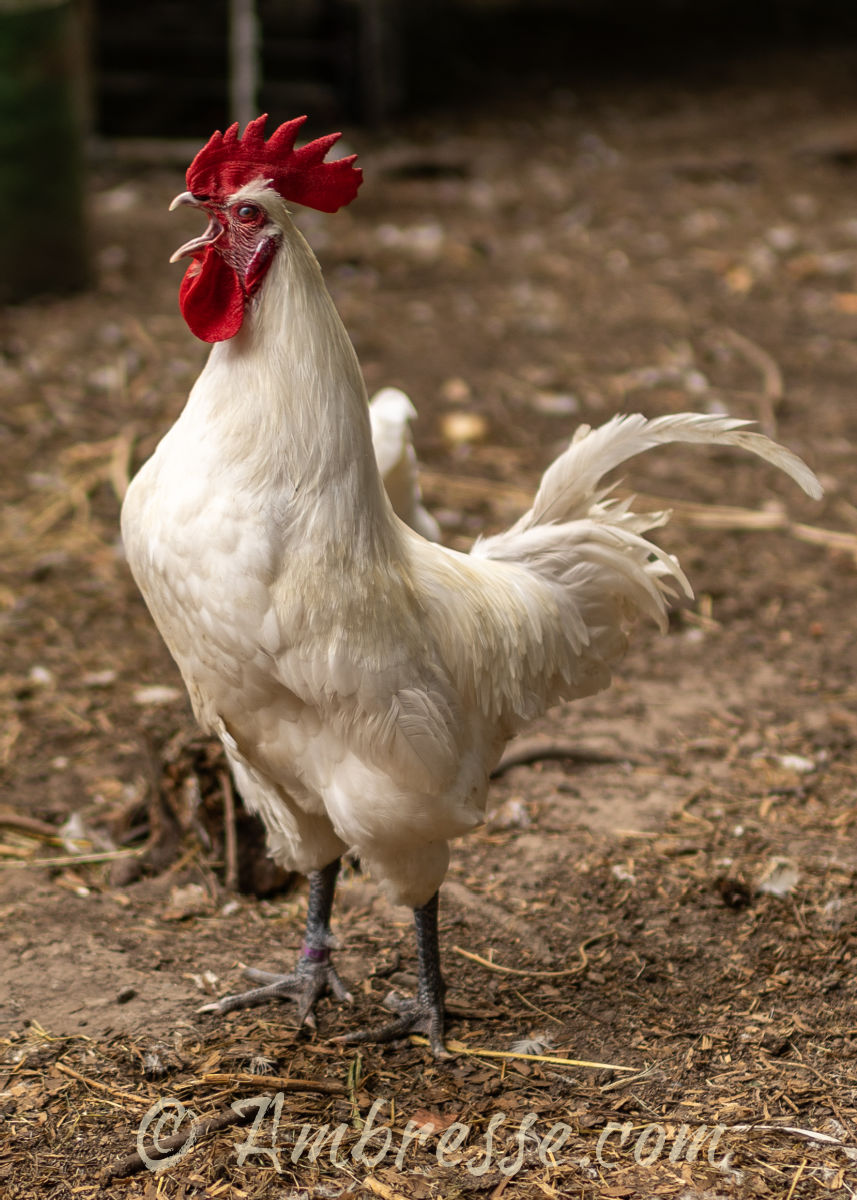