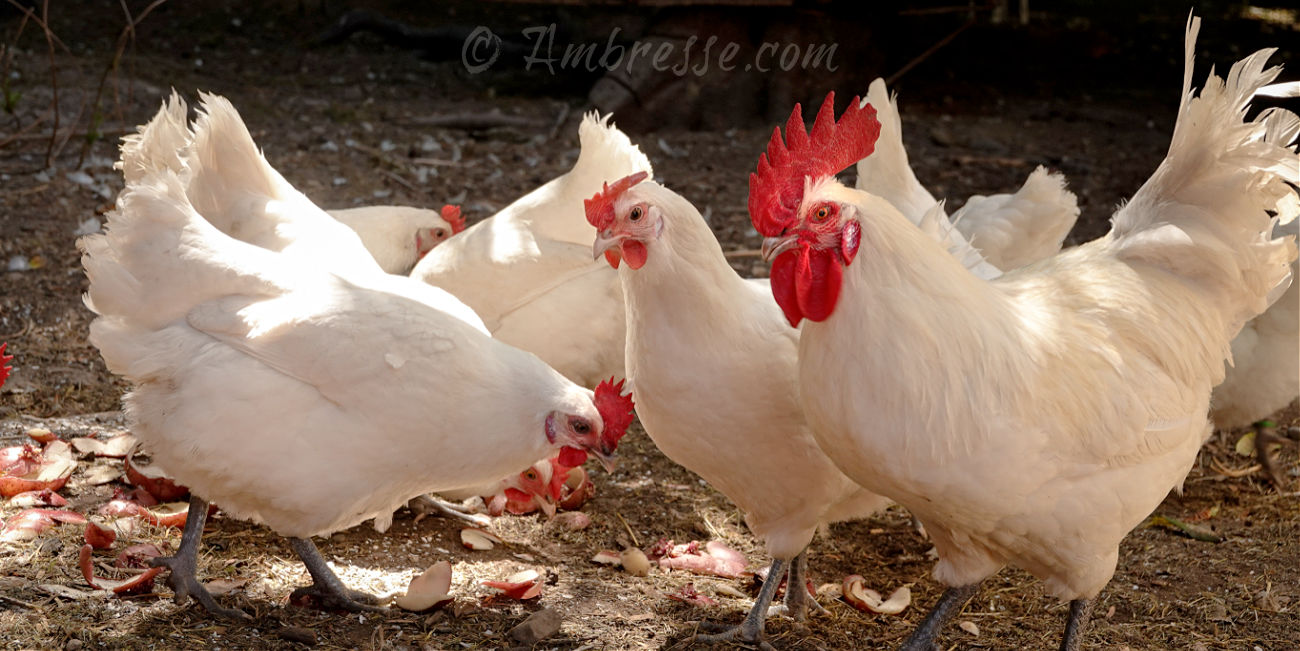 The breed is quite new to the United States and Canada, having been imported only in 2011.

If you’re hearing about this breed for the very first time, perhaps that is why.

It is hard to keep secret a breed this cool and useful!

Additionally, American Bresse have the same unique meat qualities that French Bresse chickens have. They are described as the "most delicious chicken in France" due to the fat-marbled meat sought after by renowned chefs. And they command a commensurate price in French markets.

They are lookers, too! 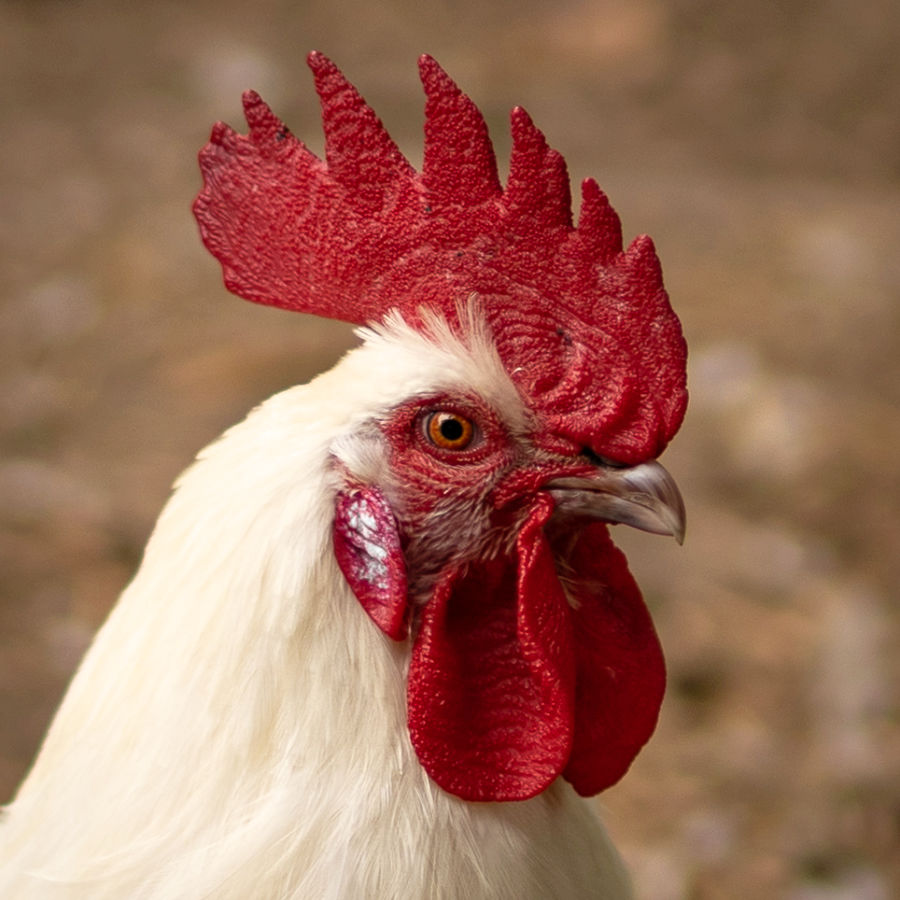 American Bresse chickens are a striking red, white and blue.

Roosters have large, shockingly red single combs and wattles contrasting sharply with their all-white feathers. The legs provide the blue, ranging in color from quite bluish to a darker steel gray.

Those first French chicken farmers may have been quite patriotic. Whether by accident or by design, Bresse chicken coloration is now proudly said to represent the blue, white, and red of the French flag.

Interesting for American Bresse breeders is that the United States flag is, very conveniently, also red, white and blue. 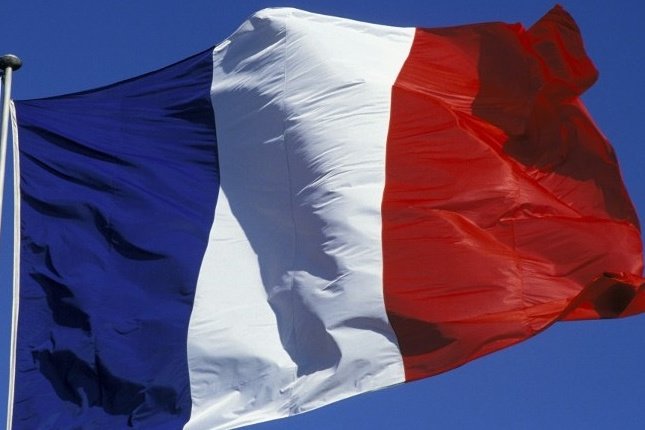 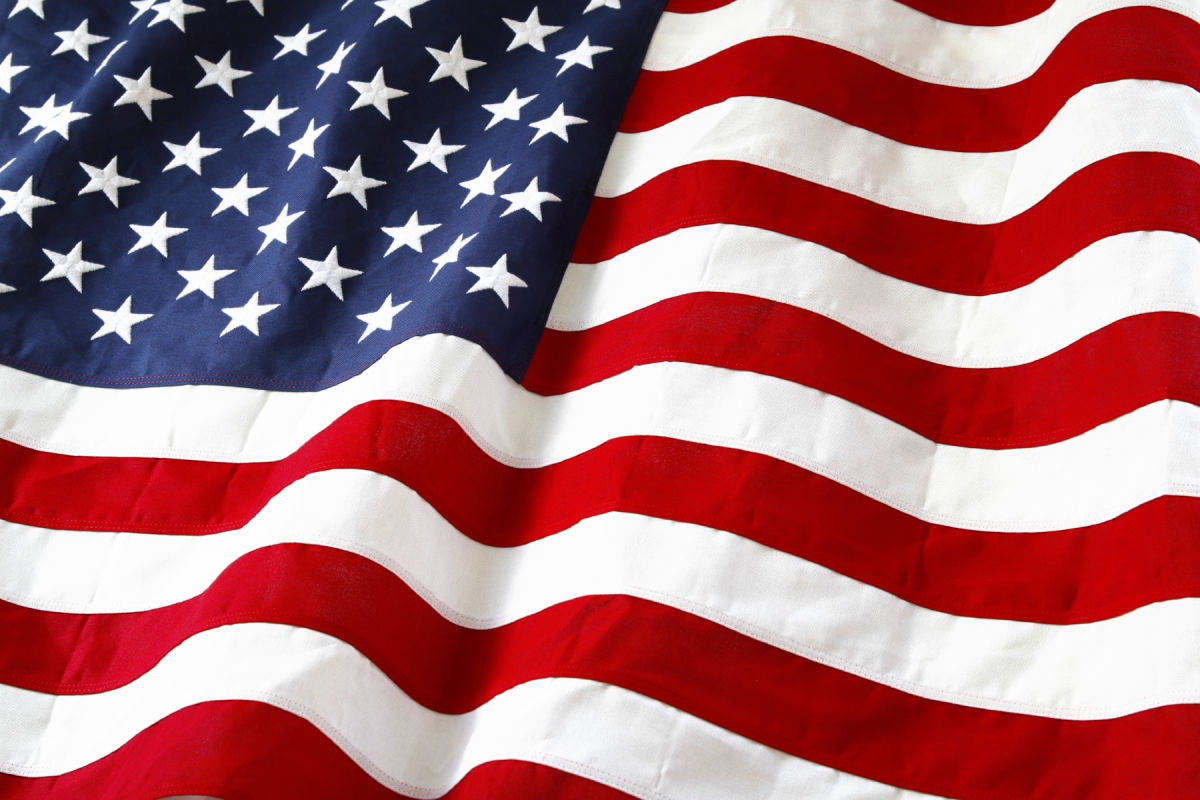 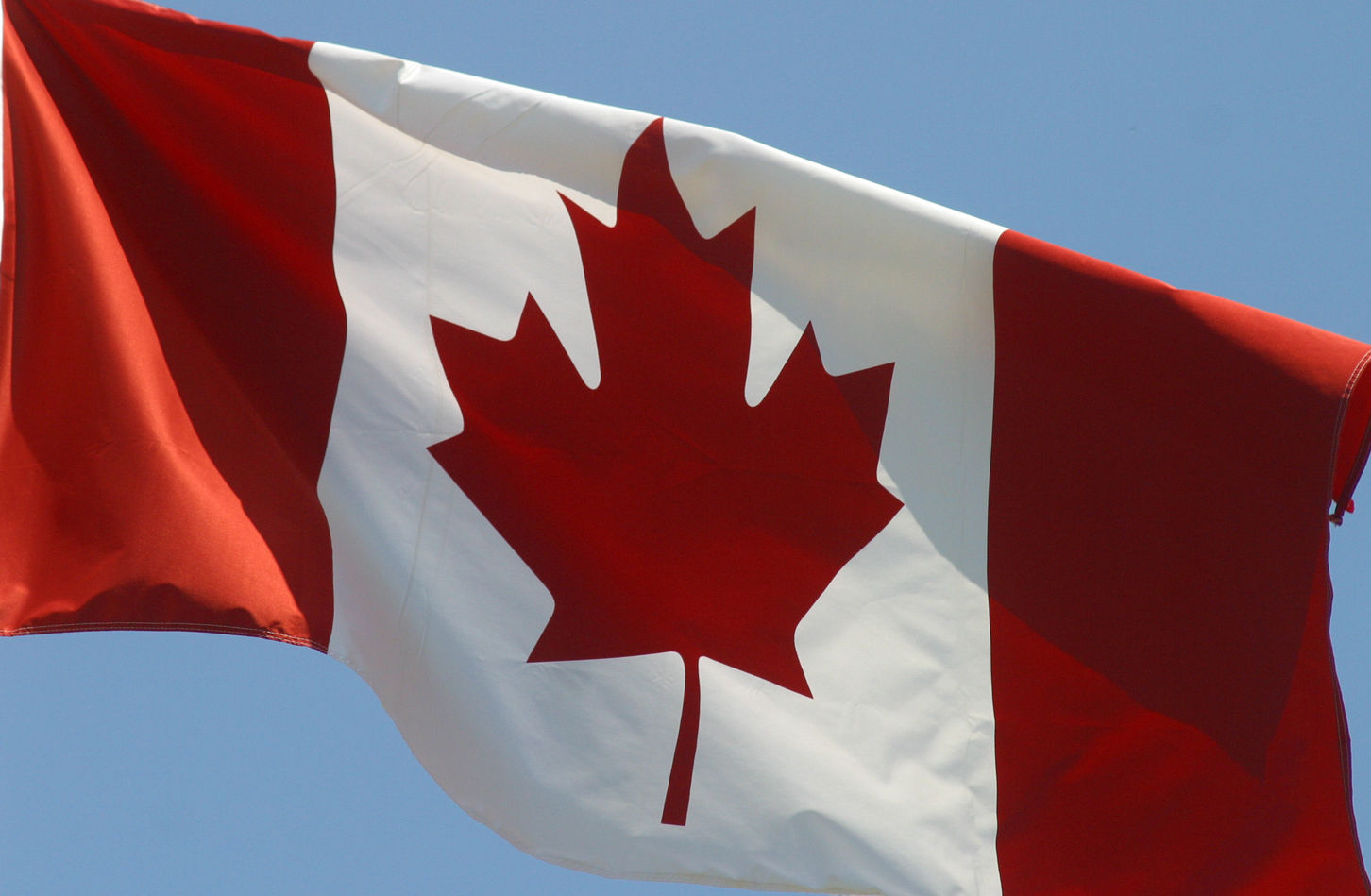 And breeders are up for the challenge. 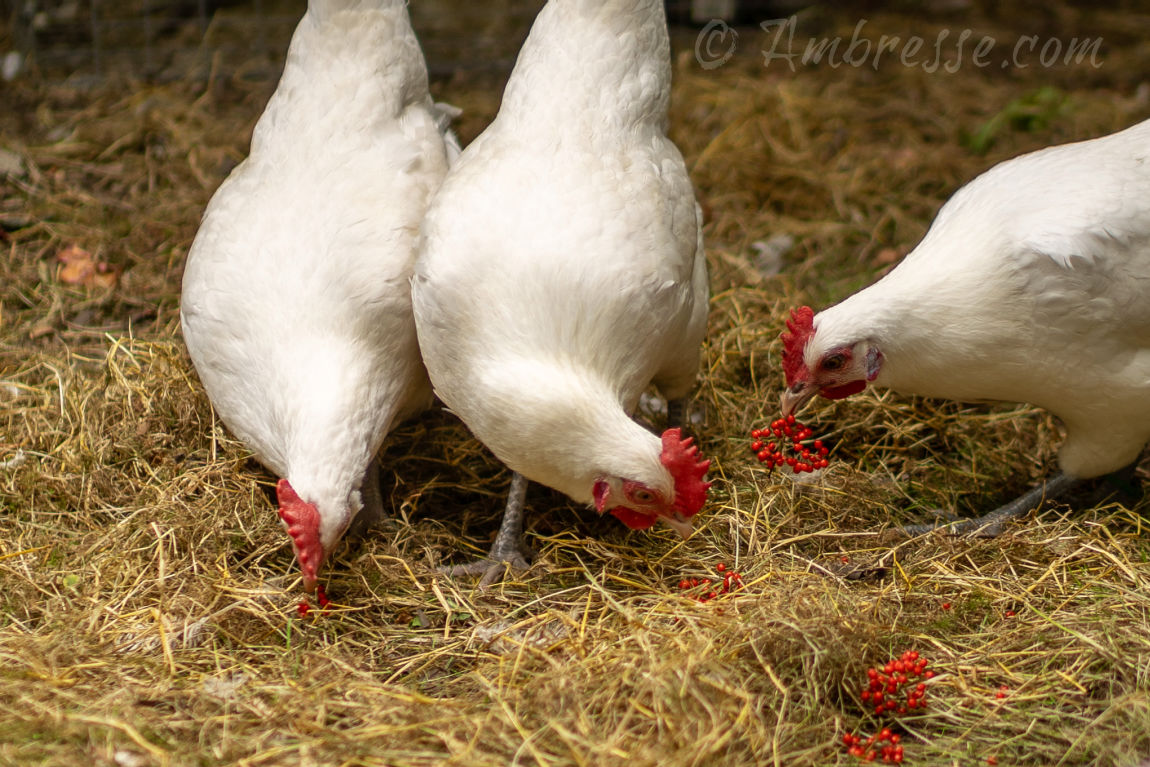 Surely it is evident that the French were not going to just sell to anyone their very best Bresse stock?

Ten years is the longest any breeders in the United States have been specifically breeding American Bresse. That is why great opportunity exists to further improve this breed, and Ambresse.com is here to help, as much as possible.

Ambresse.com is here to help...

If you answered YES! to any of the above, welcome, and keep reading!

And feel free to click on the links that interest you.

Have questions? Drop us a line and let us know how we can help. 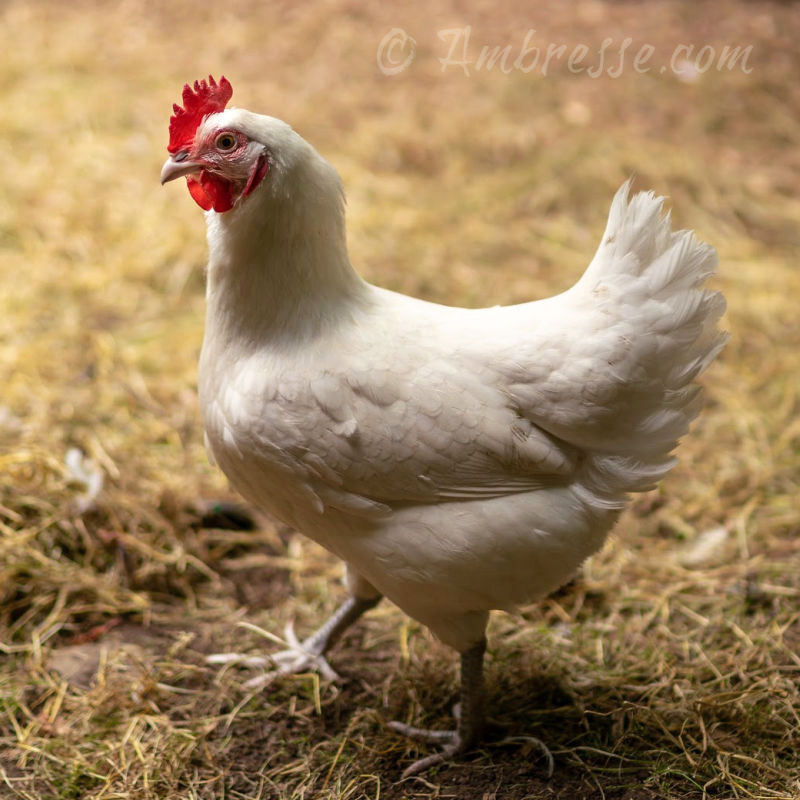 Ambresse.com will be useful to chicken owners generally...

Ambresse.com will be a gold mine of info for connoisseurs, gourmet cooks, and homemakers... 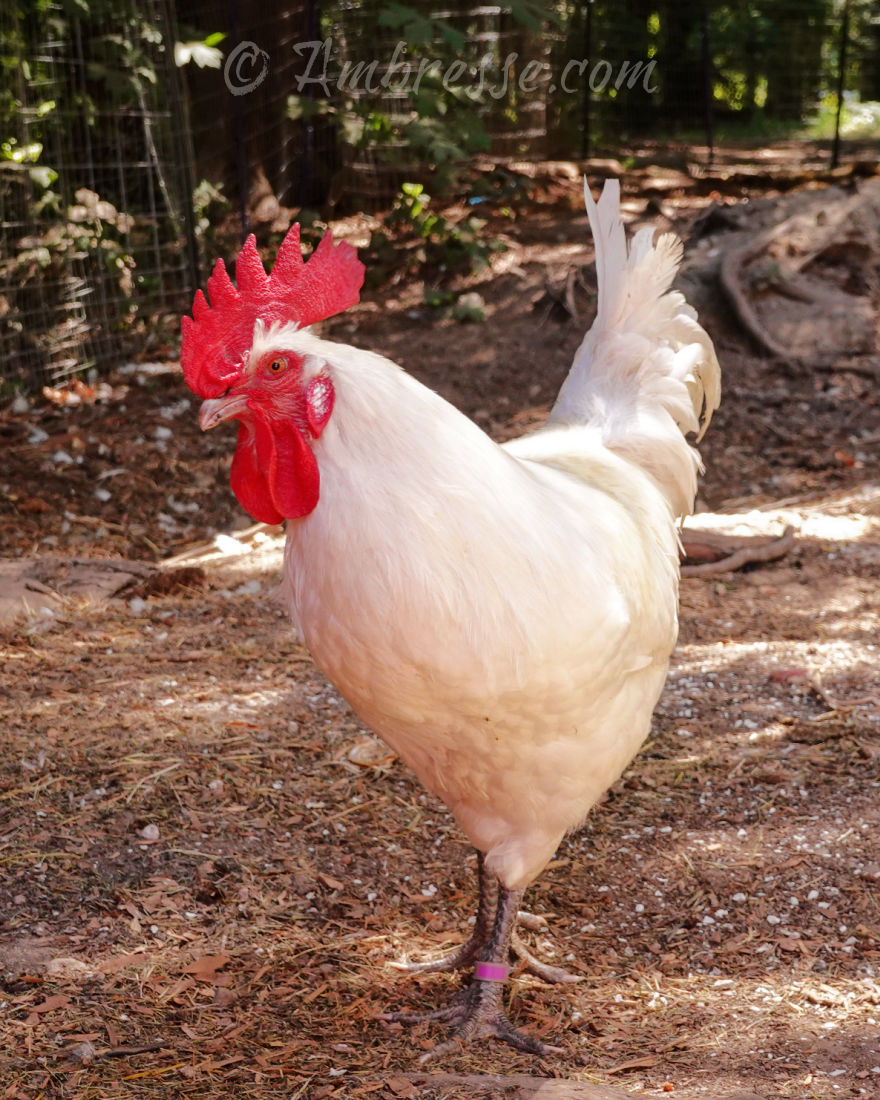 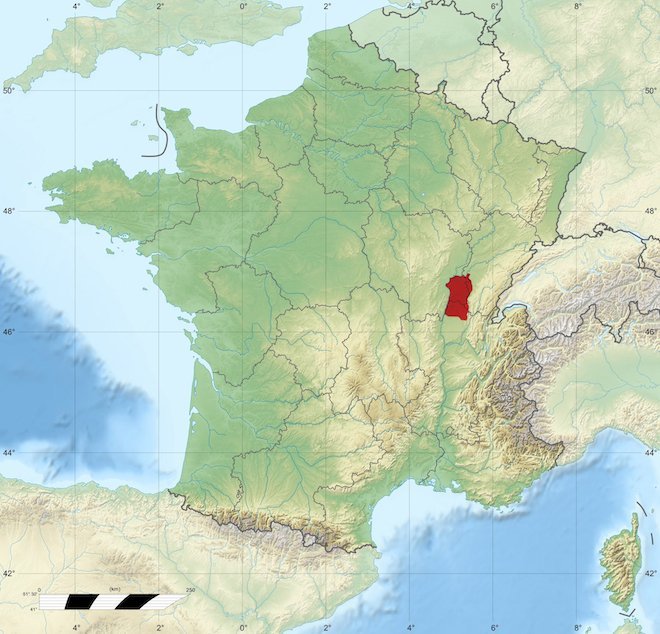 Province of Bresse in eastern France is marked in red. Click the pic to view full size. Photo: Wikipedia.

American Bresse chickens originated directly from French Bresse chickens in the Bresse province of France (pictured), which have been raised by the French people for at least 500 years, and no doubt quite a bit longer.

The year 1591 marks the first known recognition in the historical record of "Bresse" chickens.

The first French Bresse chicken imports arrived in the United States in 2011. Legal controls around the use of the name "Bresse" outside of the tiny Bresse region in France necessitated modifications to the breed name in North America. Here, the breed is currently called American Bresse. They are virtually identical genetically to Bresse chickens in France.

There is much more breed history and details on the French Bresse Chicken History page. 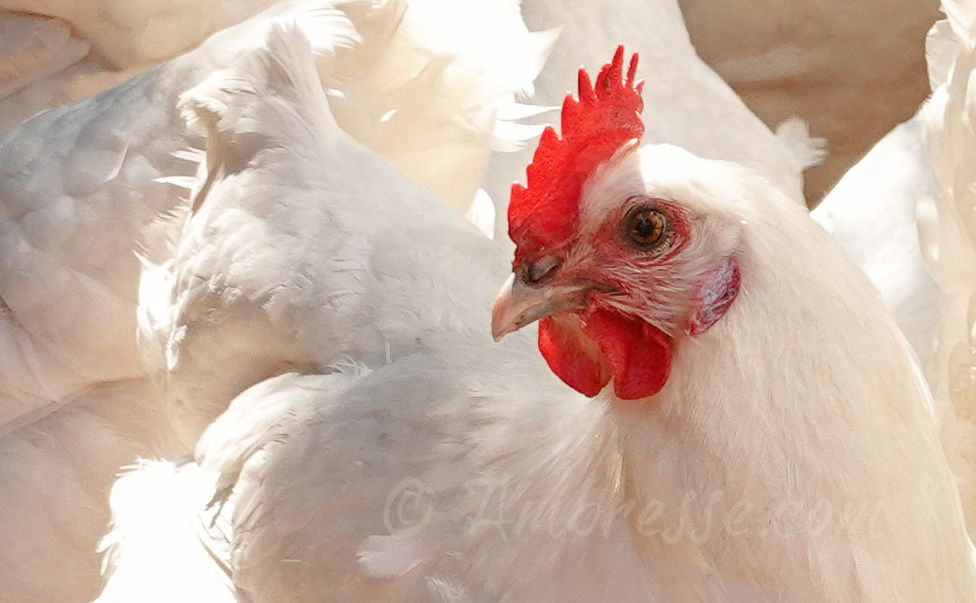 This website focuses on the American Bresse Chicken, along with other chicken-related topics. Due to the protections given by France to the Bresse breed, it is important to consistently differentiate when necessary between the Bresse chicken breed of France and North American chickens of direct French Bresse descent. For this reason, we call them American Bresse chickens, repetitively, throughout the website. You might notice that this can start to feel clunky at times. So, in order to write more fluidly, we also use the contracted term “Am Bresse” to reference American Bresse chickens. Our keystrokes spell out Am Bresse, but our heads see American Bresse. We hope you will see the same.